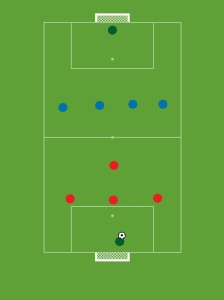 In mini-soccer, the FA introduced a rule concerning goal kicks. The rule reads “Law 16. Goal Kick. Procedure. A player of the defending team kicks the ball from any point within the penalty area. Opponents must retreat to their own half until the ball is in play. The defending team does not have to wait for the opposition to retreat and has the option to restart the game before should they choose to. The ball is in play when it is kicked directly out the penalty area.”

I think that it is a good thing for the age group I coach (under 7’s) for the reasons I will explain below. Others disagree though. It is a rule that divides opinion, and I’d love to hear what you think about it in the comments?

The biggest benefit of the retreat line is that it encourages players to play football, with the ball on the ground. Imagine the scenario without a retreat line … a goalkeeper looks up, ready to take a goal kick, and all four of his outfield players are marked. In that scenario, the goalkeeper is likely to try and kick it long. The understandable rationale being that if the ball is going to be lost then it is done as far away from their goal as possible.

I believe that the retreat line offers the goalkeeper an easy pass, to feet, and encourages the team to pass and move from there. Not only does that encourage the passing of the ball, it offers all players more touches of the ball, which will aid their long-term development. More touches = better ball mastery. Or as your parents used to drum into you, practice makes perfect. The whole reason that mini-soccer was introduced was to offer more touches of the ball to each player.

Too often in the past, English coaches would encourage defenders not to play with the ball. Cries from the touchline of ‘get rid’ directed defenders to lump it forward the big lad up front, and that tactic robs the other defenders and the entire midfield from a touch of the ball. That is one thing if you are a Premiership manager trying to set up to play to the strengths of the players you have, but if you are trying to develop young players, then I think it is better to encourage them to receive and pass the ball more often.

As with many things in youth coaching, I think it comes back to the fundamental motivation of the coach. Are you trying to win this game, or develop the players in it for the long-term? If it is the former then your thinking will be about getting the players ready for that game, if it is the latter, you will see the game as another opportunity for the players to develop skills.

As always, I’d love to hear your thoughts? Please leave a comment.

If you wish to submit an article to be published on the blog, then please email it to me at mike_nicholson@hotmail.co.uk

4 Replies to “Retreat line in mini soccer is a good thing … do you have a different view?”